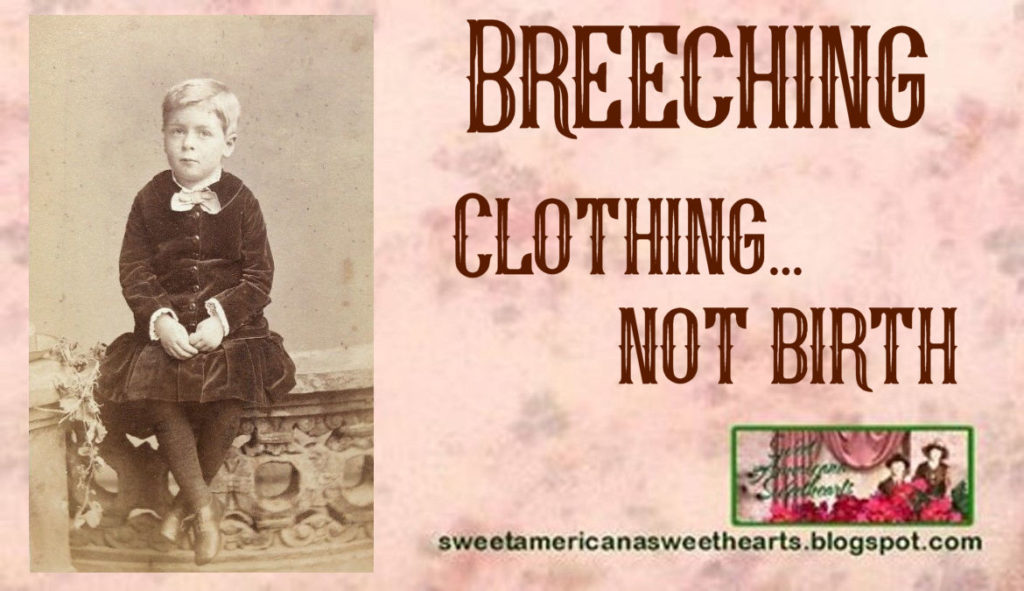 I like the little things… no, we’re not talking about ‘sweating’ the small stuff… but there are so many things that were different in the past that seem almost alien to people in the modern world. I think the most important thing is to keep learning and that, for me, means to keep reading books from the era and learning everything I can. It seems to help bring life to my books.

And that makes me happy!

One of my favorite parts about studying the Victorian Era are the pictures!!

When I was a Civil War Reenactor and Old West too I did a lot of studying pictures and books about period fabrics so I could pick fabrics for our clothes.

As far as pictures go, there’s just something so precious about pictures of children…

And there are lots of photos of boys in ‘dresses’ –

When I mentioned it in a draft of a book I had a ton of questions about it… so I thought I’d make a little post about it.

The Victoria and Albert Museum of Childhood tells us:

In Western European countries, until about 1920, boys would wear dresses until they were ‘breeched’. i.e. given their first outfit which included breeches or trousers. Breeching happened from the age of about four to eight-years-old, and varied according to different eras and families. A formal ceremony might also have taken place, to mark the boy’s progress from babyhood to boyhood, and sometimes a first haircut was also included. Up to the end of the 18th century, parents who could afford to may also have given their son a child-sized sword, or at least a toy weapon of some kind, as a token of the real sword he would own as an adult.

But… there may also be a fashionable reason for it… just like in the modern day many people pick their clothes because famous people wear them… when Duchess Kate wears a dress the style tends to sell out quickly. So where does the ‘skirt’ come from in a fashion sense?

The Herald Bulletin Website talks about Queen Victoria’s fashion choices for her children:

Queen Victoria ascended to the British throne in 1837 and served as a role model when she dressed her nine children in sailor suits and kilts which allowed a child to be more “natural.” This was a child-friendly way of dressing infants. Her fashion tastes quickly spread to other royal families of

I’m usually NOT a proponent of wikipedia as research but this page does seem to have it’s ducks in a row… so I’m including it as a historical perspective.

So.. if you happen to see a mention in a book about the Old West/Western/Victorian Historical Romance of boys in dresses… now you’ll know why.