I know what you’re thinking… What? Wait, what?But let’s roll with it, okay?

A long time ago in a fandom far away, I ran a website that was an “Oral History” for actors, crew, and fans that were there on set. People would share pictures and first hand stories about the TV Show production. For about six months, no joke, I couldn’t find new people, I couldn’t get people to send back their transcripts or picture releases… and I felt like this ONE interview was the key to this whole broke-down moment… like that one interview was stuck and if I could get it to free itself… we would be GREAT.

The next day, I emailed the actor with a ‘Hey… sorry to bother…” and the next day, DING! I got a reply from him with the final okay on his interview to post it on the site. 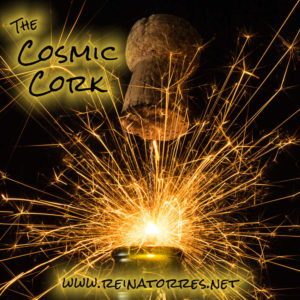 It was like fireworks in the sky… or that resounding POP of a cork from the champagne bottle.

The rest of the week it was like the floodgates had opened up… people called me back, release forms poured in… WOW…

So *clears throat* Reina? What does this have to do with your writing?

Gosh, you ladies are really holding my feet to the fire on this!

I’m not a PANTSER NOR a PLOTTER – I get my story ideas in a really organic way. Moments of inspiration usually lead to jotting down ideas for a plot and snippets of scenes.

When I write the story itself, I don’t always write it in Chronological order…. meaning that I don’t always start with Chapter One. Sometimes I just start where the muse starts in my head… and then I’ll go back to the beginning… and start moving forward…

But sometimes… that sneaky cork pops in… and then I’m stuck. And when I get there I hear Miss Mona Lisa Vito in my head. Remember that scene from “My Cousin Vinny”?

Mona Lisa Vito: The car that made these two, equal-length tire marks had positraction. You can’t make those marks without positraction, which was not available on the ’64 Buick Skylark!

Vinny Gambini: And why not? What is positraction?

Mona Lisa Vito: It’s a limited slip differential which distributes power equally to both the right and left tires. The ’64 Skylark had a regular differential, which, anyone who’s been stuck in the mud in Alabama knows, you step on the gas, one tire spins, the other tire does nothing.

That’s right. I have one wheel that just spinning.. but getting no traction under me at all.

Sometimes to Pop the Cork – I’ll go to the end…

No, not THE END… but the last scene. Or the Epilogue. And then I work BACKWARD… to get to Z, then what’s Y, and from Y… where was X… By knowing where this ‘ends’ I can almost see the path there.

I’ve been working on a book and (hangs head), I feel horrible because I didn’t get my post added in early. I’ll save that post for next month, because I felt like this post is where I am today…

What do you do when you’re ‘stuck’ on something?

Holding Out for a Hero… a Beta Hero