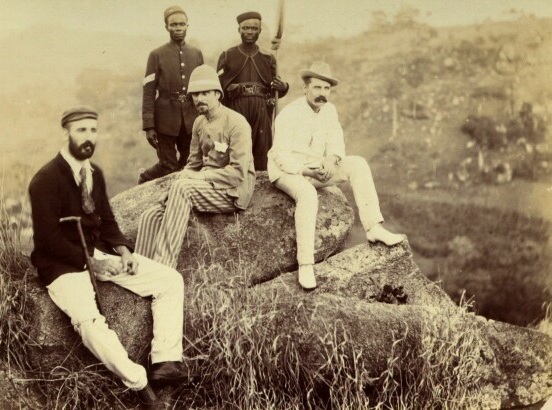 Waiting for the gas bag to be refilled…

“Good Gad, Nigel, the old man can certainly eat his share and then some.”

Nodding, Nigel leaned a bit closer to Windel so that even the porters standing guard behind them couldn’t hear. “Careful, I heard his hearing is even better than his appetite.”

They watched in a somewhat queazy fascination as the captain tore a leg from the chicken on his plate. The grease from the flesh of the chicken glistened along the fringe of his whiskers.

Windel fidgeted, nearly hoping from one foot to the other as the heat of the ground beneath his feet began to leech up into his soles.  “I’d rather we were on our way soon.”

Looking up from his calculations, Nigel agreed. “It’s best to remain in the air through the hottest hours of the day. The heat is quite enough then, without standing on the surface.”

“I gather this is what the surface of the sun feels like, eh, old chap?”

Wielding her parasol as though it were a shield to keep the sun at bay, Eudora managed to find a perch on a nearby boulder. “The crew assures me that we shall be on our way directly.” She settled the hem of her skirt to cover the laces of her boots and looked at her two friends. Watching each in turn and they stared raptly at something. She turned to see what it was that had captured their imaginations.

She looked first to one side of the Captain and then the other. Neither view was remarkable in anyway, shape or form, so she was reduced to asking the question she hoped would assuage her curiosity. “What is it that has you both fairly mesmerized?”

**I started a long Steampunk adventure story years ago based on a dare to let someone else name my main character… Eudora Cowslip and her friends, Windel and Nigel started their adventure**