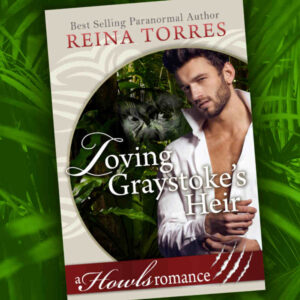 May 12, 2020 was the release date for Loving Graystoke’s Heir – a Shapeshifter romance

She knew she could find him, because the connection between them is stronger than lifelong friendship… they were soulmates

Tamsin Ellery wasn’t the person Graystoke Environmental wanted to send to Africa on a rescue mission, but she was the one willing to go. Her lifelong friend, Donal Graystoke, the largest shareholder and CEO of the corporation disappeared while working to protect wildlife from poachers and trophy hunters.

It doesn’t matter how many people tell her that she’ll never find him after so many years away. Her heart tells her he’s still alive. And she loves him too much to ever give up.

To protect the only person he loved, Donal Graystoke lost himself in Africa, believing that he was losing his mind. Instead, he discovered that what he carried within him was a gift rather than a disease. Harnessing the power of nature, shifting into the form and majesty of a gorilla, gave him a new mission in life.

Just as Donal and Tamsin reconnect, danger isn’t far behind. Could fate be so cruel to take away their future before it even begins.

CLICK ON THE BOOK IMAGE OR THESE WORDS TO GRAB YOUR COPY!