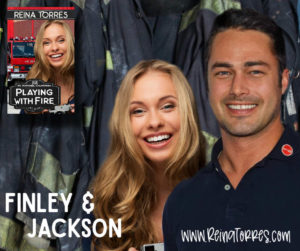 (Playing With Fire was a originally a Kindle Worlds story set in the amazingly romantic world of Marina Adair’s St. Helena Vineyards and the hero was a character called Roman Brady, created by Marina.)

When I was writing “Playing With Fire” – I had to know. Where did Marina Adair get the inspiration for:

“…the six-foot-three behemoth of a man standing next to Matt and holding a full rack of ribs. Dressed in a costume that was all kinds of badass, complete with a flowing cape and enough rippling abs and bulging biceps to intimidate even the real Superman, Roman was ready to save the world and get the girl.”

“Roman was also the kind of guy to impress the girls because he had stable, selfless, and husband-material sewn into the back of his cape.

“Not to mention, he was last year’s PTA Fireman calendar’s Mr. May, as in ‘May I see those amazing abs once more.”

I broached the question to the Queen of All St. Helena, Marina Adair herself.

(When I re-set the stories in St. Raphael, CA – I renamed Roman – Jackson Caffrey)

Up in the Air: Vassar College

Listen to What Your Body is Telling You