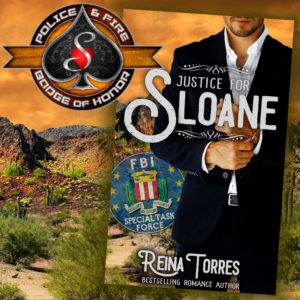 For FBI Agents like Cruz Livingston and Vicente Bravo, their DNA was imprinted with Law and Order. Defending those in danger comes as easily as breathing.

As a Special Agent for the FBI, Vicente was treated to a front row seat to see how those ‘with’ have an easier shake than those without. Instead of letting it shake his convictions, he’s worked hard to even the odds and make sure that Justice is blind to more than color, it’s also the size of their bank accounts and social status.

Sloane King ticked all his boxes. Born a Texas Princess with money and beauty to spare, she didn’t want for anything… at least from what he could see. Debutante turned charity maven, everyone sings her praises, until someone wants her dead. Charged with keeping Sloane alive until the threat to her is neutralized, Vincente finds himself up to his neck in contradictions, including how much he wants more than just a few breathless moments with the feisty woman who challenges everything he’s come to believe about the world around him.

As the search for the source of danger comes to a head, it will take the combined resources of San Antonio’s best first responders to protect and save the woman he’s come to love. Will that be enough?

Click Here to get your copy of ‘Justice for Sloane’!